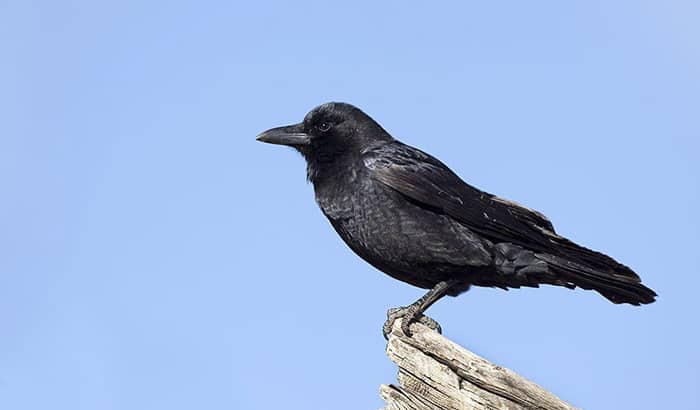 Do you see those big black crows flying around in the sky? They are common in many parts of North America. Crows are interesting birds, and there is a lot to learn about them.

In this guide, we will discuss the habits and behavior of American crows. We will also provide tips on how to identify different types of crows. So whether you’re a crow enthusiast or just curious about these birds, read on for more information.

What is an American Crows?

The bird can be found in almost every part of the continental United States and Canada except for parts of Alaska and most southwestern states such as Arizona, New Mexico, West Texas, and Colorado.

They are also not common in Florida but can be seen migrating through the state each year from their summer homes further north to their winter homes further south along the coasts within range of freshwater sources for drinking water (e.g., lakes or rivers).

American crows live throughout rural areas, where they nest among large open fields with scattered trees like cottonwoods or pecan groves. They also reside in suburban neighborhoods where they often nest on tall power poles.

The American Crow is one of the few species that has been taught how to imitate human speech patterns.

Researchers are interested in learning about bird intelligence levels because this particular type tends to learn quickly and teach itself new tricks. It can imitate without being given any special training beforehand, as some animal trainers do with parrots or horses.

The American crow is one of the most common birds in North America and can be easily identified by its black feathers, which almost look like they have a blue sheen to them.

The bird has a stout body with a strong bill that it uses for tearing apart its prey. It also has long legs that it uses for walking or running as well as powerful wings that allow it to fly long distances.

Crows typically measure 18-20 inches in length from head to tail and weigh around 0.88 pounds when fully grown.

Like most birds, these crows have four toes on each foot, with two in front of the other two. Their toes give them a good grip for holding onto branches or other perches while preening (cleaning their feathers) themselves.

They often rest at night on their favorite roosting spot, such as an old tree branch up high above ground level, where predators cannot reach them easily.

When perching, American crows tilt their head forward to get a better view of what’s going on around them. They also use their beak as a third leg to help keep them stable while standing upright.

They have excellent eyesight, which allows them to see predators from great distances away (even when perched high up in a tree). It will often give alarm calls to let others know that danger is near – either flying off themselves or mobbing (chasing) the predator until it leaves the area.

American Crows are known for their harsh “caw” calls. When an American Crow is flying by itself, it makes several short, hoarse, or caws.

This call usually precedes flight as the crow takes off from its perch or flies towards another tree to land on. The sound these birds make can be transcribed as caaW! caaW! Dropping in pitch at the end.

You may also hear them give softer nasal croaks and rattles when multiple individuals are flying together in a flock or group that they do not want to alarm with loud calls (i.e., flocks of Turkey Vultures).

While I have personally heard this behavior on a few occasions, it is more often mentioned in the literature than what I have listened to with my own ears.

American Crows also make quiet calls while they are perched and not flying, which you may hear. It sounds like a murmuring purr or growl, which is usually made by several birds at once when they are roosting together as a group during late evening (or early morning) hours before nighttime or sunrise.

If you listen carefully for these quieter calls, you can sometimes determine how many individual crows there are in the group just from listening to them call back and forth to each other.

Although less common, American Crows give alarm calls if mobbing another bird of prey, such as an eagle or hawk. The alarm call is a loud, harsh scream and can be heard from some distance away.

You will know about it if you are ever close to an American Crow when it mobs another bird!

3. How Are American Crows Different From Other Birds?

American crows are different from other birds in a few ways.

4. How Long do American Crows Live?

American Crows have a lifespan of around seven years in the wild. In captivity, they can live up to 20 years. They are long-lived birds for their size.

American Crows reach sexual maturity at about two years old. The oldest known American Crow was a male who was 24 years and 11 months old when he was found dead in California.

In most cases, crows die from being killed by predators or accidents, such as getting hit by cars. However, the disease also takes its toll on crow populations.

In some parts of the country, the West Nile virus is a major threat to crows and has caused large die-offs in recent years. Other diseases that affect crows include avian botulism, avian cholera, and aspergillosis.

American Crows are survivors and have been able to thrive in many different habitats. They live in cities, suburbs, and rural areas.

They also adapt well to changes in their environment. If a food source disappears or their habitat is disturbed, they will find another way to survive. This makes them one of the most successful bird species in North America.

5. Where do American Crows Live in the United States? 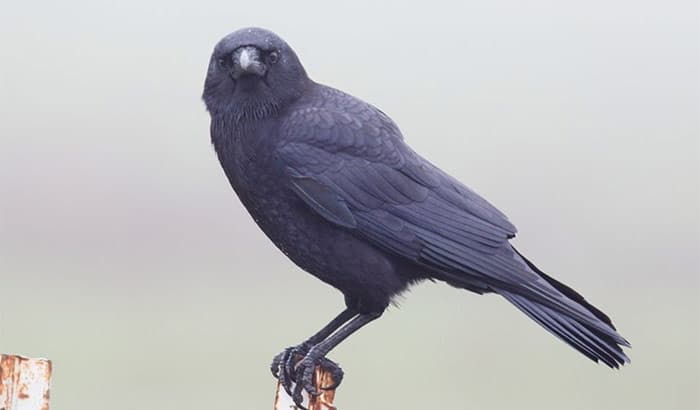 American crows live in every state except Hawaii. They are most common in the Midwest and East Coast but can be found all over the country.

6. Where do American Crows Sleep?

American Crows usually sleep in trees, but they can also sleep on the ground. They often choose a branch close to the trunk so they can keep an eye on their surroundings.

American Crows typically sleep during the day and stay awake at night. This helps them avoid predators like hawks and owls.

7. Where do American Crow’s Nest?

American Crows usually build their nests near water sources such as rivers and lakes but will also use upland fields above bodies of water if there is an adequate source of food nearby.

They often build their nests on trees along roadsides where there is a good view to spot predators coming from any direction. Some crows may even be found nesting on telephone poles within city limits when suitable trees are scarce.

When building their nests, American Crows use sticks and twigs lined with softer materials like grasses or feathers. The female crow will lay eggs in the nest after incubating them for about three weeks before hatching them into baby crows known as “nestlings.”

Both parents feed these young birds until they fledge from their nest at approximately two months old. Then, they’ll become independent but stay close to home for several more years before departing on their journeys across North America!

The answer is not that simple. There is more than one kind of American Crow, and they all behave differently

In general, crows tend to stay where food is available. When food sources become scarce due to severe weather (i.e., snow), natural disaster (i.e., fire), or human interference (i.e., construction), crows may be forced into neighboring areas in search of sustenance.

For example, when it’s cold and snowy in the Midwest United States, flocks will congregate farther south along the Atlantic Coast — especially around large landfills or other consistent food sources like feedlots or agricultural fields with grains still standing after harvest season.

It’s not unusual to see American Crows in Florida or Georgia from December through February.

However, there are also cases where crows have been spotted flying hundreds or even thousands of miles northward during the winter months.

So, while it’s generally true that crows stay put unless they’re forced to move, there is some variation based on the individual bird and its environment.

9. Where do American Crows go in the Winter?

In the winter, American crows typically stay in warmer climates where food is abundant. Some common places for them to migrate to include Florida, Texas, and California.

In some cases, American crows will travel outside the United States altogether. A small number have been spotted in Bermuda and even as far away as Italy!

It’s unclear why these crows are traveling so far from home, but they may be following food sources or looking for new territory to call their own.

10. How to Attract American Crows?

You can attract American crows by providing them with a food source, water, and shelter. Crows are scavengers and will eat almost anything, so you can provide them with various bird feeders or leave out food on the ground.

A list of flowers that American Crows like to eat. Flowers are a good way for attracting American Crows because these birds love to feed on the nectar and pollen.

There are many different flowers, so what kind of garden you want in your yard is up to you.

By providing a diverse range of plants in your garden, you can attract these beautiful creatures and create an inviting space for them to visit.

13. What do American Crows Eat?

The American crow is omnivorous and opportunistic. It will eat almost anything, including any parts of plants, seeds, fruit, crops, insects and other invertebrates (earthworms), mollusks (snails), annelids (leeches), small vertebrates such as frogs or mice; carrion (dead animals); garbage; eggs; nestlings of other species.

They also feed on animal matter like grasshoppers, mice, and birds, including their kind, in the winter months when food is scarce. But they can also be found scavenging for food at landfills during this period.

The young ones learn from their parents what type of foods they should avoid by watching them react after eating something bad. American crows have also been observed using tools such as sticks, rocks, and bread to get food items from difficult places.

They are known to cache (store) food for later consumption, especially during winter. This could be in various locations, including tree branches, under leaves, or snow on the ground. Crows will also work together to store food by sharing it equally amongst themselves.

14. How to Make American Crows Food?

There are many ways to make American Crows food.

15. Where to Place an American Crows Feeder?

You can attract American crows to your yard by providing a feeder stocked with their favorite foods.

When placing your crow feeder, keep the following tips in mind:

Crows are right up there with the best of them when it comes to intelligence. They have a complex social structure, but they’re also incredibly resourceful and adaptable. These birds embody the American spirit in many ways: scrappy and determined, and they never give up.

So next time you see a crow in your backyard or perched on a streetlight, take a moment to appreciate this amazing bird.