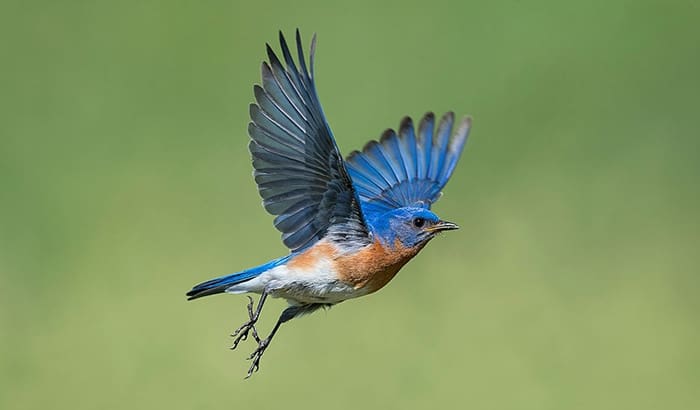 Birds use colors to their advantage when surviving in nature. The signature pigments on the bird’s feather are also the first signs to tell different species apart.

If so, how can we differentiate bluebirds and blue jays, which are thought to have many similarities? For instance, they both live in North America; they’re blue-colored, mostly found near trees.

However, once you take a closer look at these types of birds, some details set them apart! In this blog post, we’ll talk about the differences between bluebirds vs blue jays.

The Distinction Between a Bluebird and a Blue Jay is Noticeable

Blue jays are much bigger than bluebirds, weighing about 2 to 4 ounces, compared to bluebirds’ average weight of around 0.5 to 1 ounce only.

Furthermore, blue jays’ feet and tails are longer, while their beaks are thicker than bluebirds’.

We can spot a blue jay when seeing a blue crest on its head, which quickly distinguishes it from a bluebird.

Blue jays settle in wooded areas where they can find plenty of food and cover from predators, while bluebirds prefer open fields with scattered trees for nesting spots. But both species will also take advantage of suburban backyards if large trees are available to build their nest!

The differences between blue jay vs bluebird start right at the beginning: where do these animals call home?

Cavity nesting is common among both types of birds, but the materials used to build their nests vary greatly. In detail, bluebird nests are typically made out of grasses, twigs, and leaves, while blue jay nests are composed of sticks, bark strips, roots, and moss.

One of the most noticeable differences between bluebirds vs blue jay sounds is that bluebirds are much quieter than blue jays.

Blue jays will eat almost anything while bluebirds stick mostly with berries and insects found on trees. This means that bluebird nests offer a cleaner environment because there aren’t food scraps left behind from eating, unlike what happens in bluejay nests, where you often find leftover seeds all over the place.

Furthermore, bluebirds are monogamous, meaning they mate for life and raise their young together. Blue jays, on the other hand, are not as committed to their mates. If a bluejay finds a new food source or territory, it will likely leave its current partner and move on.

Bluebirds tend to be territorial, while bluejays are usually not as concerned about defending their nesting spot.

Fun fact: These birds have been known as opportunistic thieves since their interactions with other animals often lead them to steal food sources! It’s not uncommon for these types of encounters to result in violence between the two parties involved if one doesn’t back down quickly enough.

What are the distinctions between bluebirds and blue jays? You might be surprised to learn that many things set these species apart from each other.

Still, the two birds’ patterns and colors vary slightly depending on their geographic location. One key difference between these birds is that bluebirds are cavity nesters while blue jays build nests in trees. This means that you might see bluebird houses along nature trails, while blue jay nests can often be spotted high up in tall trees.