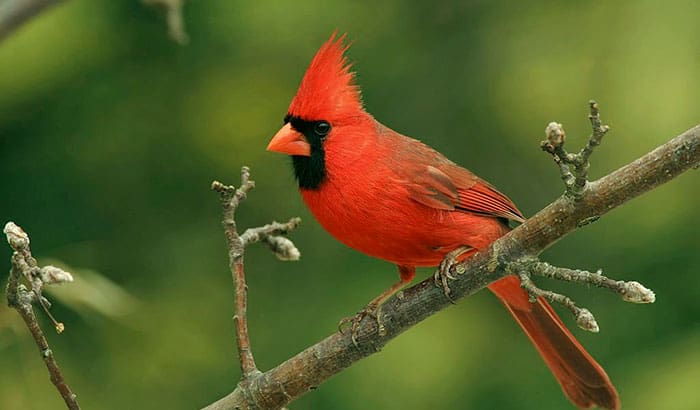 Cardinal birds are a beautiful sight to see, and they can be found all across North America. These birds are known for their bright red feathers, and they are a popular attraction for bird watchers.

This blog post will discuss everything you need to know about cardinal birds! We will cover topics such as where to find them, what they eat, and how to identify them. Hopefully, these pieces of information will help you enjoy these beautiful creatures even more!

Cardinal birds are small North American birds known for their bright red feathers. Cardinals are usually about six inches long, and they have a stout build and a thick neck.

These birds can be found in almost all of the continental United States, and they are most commonly seen in open areas such as fields and gardens.

Cardinal birds are diurnal, which means they are active during the day. They are usually very vocal, and they have a wide range of songs that can be heard throughout their territory.

Cardinals are monogamous, meaning that they form one lifelong bond with their mate.

Male and female cardinals look similar, with reddish-brown feathers on their heads and breasts. The males are a little brighter in color than the females. They also have a distinctive crest on top of their head. Males are slightly larger than females.

Cardinals can be identified by their bright red plumage (the male’s coloring is especially intense), as well as their black “mask” that extends from the base of their bill across their eyes.

You can also distinguish cardinals from other birds by their unique flight pattern; they hold their wings slightly tilted upward as they fly.

Cardinals have thick beaks, which they use for cracking open seeds. They also have short, cone-shaped tails.

Cardinals are about the size of a sparrow, measuring between six and seven inches in length.

Their wingspan is around twelve inches.

Cardinal birds have a very distinct and easily recognizable song. In fact, their song is so well known that it has been used in commercials and as the theme song for a popular TV show.

It is a series of clear, high-pitched whistles that can be heard from a great distance.

Cardinal birds will often sing together in pairs or groups, creating an even more beautiful chorus. Listening to cardinal bird songs is one of the best ways to enjoy these beautiful creatures!

The male cardinal is one of the most vocal birds in North America. He can sing up to three hundred different songs! Cardinals’ calls range from a simple “chirp” to a complex melody that lasts for several minutes.

The female cardinal isn’t quite as vocal as her mate, but she will also sing at times.

Both sexes call out when they sense danger or want to let each other know where they are.

Cardinals are generally quiet during the winter months, but you may still be able to hear them singing occasionally.

How Long do Cardinal Birds Live?

Cardinal birds can live up to 12 years in the wild. In captivity, they have been known to live as long as 17 years.

The oldest cardinal bird on record was a male at least 20 years old when he was recaptured and banded in Ohio in 1978.

Female cardinals usually live about one year longer than males.

Types of Cardinal birds in the United States

Two types of cardinal birds that can be found in the United States are the northern cardinal and the rose-breasted grosbeak.

The northern cardinal is the most common type of cardinal, and it can be found in almost every state.

The northern cardinal is a small bird with a bright red body and blackhead. This species ranges from southern Canada to central Mexico. It is usually seen near open areas such as fields and gardens. Northern cardinals are very vocal, and they have a wide range of songs that can be heard throughout their territory.

The rose-breasted grosbeak is less common, and it is mostly located in a few states in the East and Midwest.

The rose-breasted grosbeak is a medium-sized bird with a pale pink body and a blackhead. This species ranges from eastern Texas to southern Canada.

It is usually seen near wooded areas such as forests and thickets. Rose-breasted grosbeaks are also very vocal, and they have a wide range of songs that can be heard throughout their territory.

Both the northern cardinal and the rose-breasted grosbeak are popular birds for bird watchers, and they are relatively easy to identify.

These species are both unique in appearance, and they are easily distinguishable from other North American birds.

If you want to see a cardinal in person, your best bet is to visit an open area such as a field or garden. Cardinals are usually very active, and they can be easily seen perched on trees or fences.

You may also hear their distinctive songs coming from nearby!

If you want to see a rose-breasted grosbeak in person, your best bet is to visit a wooded area such as a forest or thicket.

These birds are usually shy and elusive, so it may be more difficult to see them than cardinal birds. However, if you listen carefully, you may be able to hear their beautiful songs echoing through the trees!

Both of these species are protected by the Migratory Bird Treaty Act of 1918, so it is illegal to kill, capture, or harass them. Be sure to enjoy these beautiful creatures from a distance, and never try to touch or disturb them!

How Are Cardinal Birds Different From Other Birds? 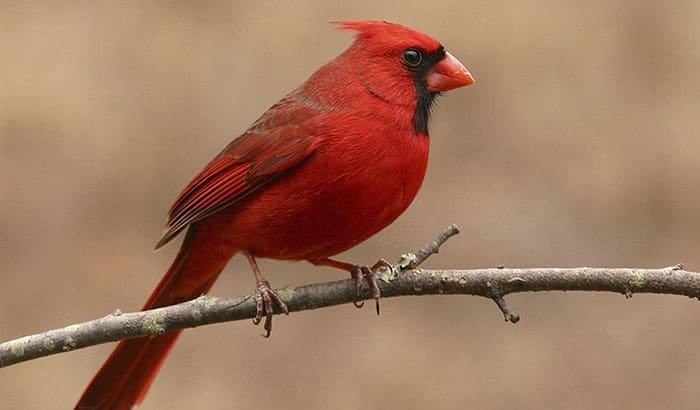 Cardinal birds are different from other birds in a few ways:

Where do Cardinal Birds Nest?

The female cardinal lays between three and six eggs in her nest, and both parents help take care of the young chicks until they can fly away.

Cardinal chicks can be quite noisy as they beg for food! The parents will feed them insects, seeds, fruits, and other items depending on what is available locally.

Where do Cardinal Birds Sleep?

Cardinal birds like to sleep in high places. They will often find a spot near the top of a tree where they can stay safe and warm. Cardinals also roost in shrubs and hedges and on fence posts and power lines.

When night falls, these beautiful birds head off to their chosen sleeping spot.

Cardinals usually sleep in small groups, and both the male and female take turns to keep watch over the others while they snooze.

Cardinal birds are one of the only bird species that do not migrate. They stay in the same area all year long.

Such a habit is a great advantage for bird watchers because they can see these beautiful birds at any time during the year.

Where do Cardinal Birds go in the Winter?

In the winter, most cardinal birds stay in the same place where they were during the summer. However, some northern cardinals will fly south to warmer areas for a few months.

The exact destination of these birds varies from year to year. Still, it is typically somewhere in central or eastern Mexico.

Mexican cardinals also sometimes fly south for the winter. However, they usually stay closer to home – in southern Mexico or Guatemala.

When do Cardinal Birds Lay Eggs?

The majority of cardinal birds lay their eggs in late March or early April.

In any case, egg-laying usually happens about two weeks after the birds have started to sing.

How to Attract Cardinal Birds?

Cardinals are beautiful, songful birds that can be found in many parts of the United States. They are easily attracted to feeders with a variety of foods but especially like sunflower seeds.

Cardinal birds are beautiful and popular backyard birds. There are several ways to attract them to your yard.

What do Cardinal Birds Eat?

Cardinal birds are omnivorous, which means they eat both meat and plants. They typically eat insects, seeds, fruits, and nuts. Cardinals also like to eat bird feeder food, such as millet or thistle seed.

Their favorite is thistle seed, and they also like sunflower seeds, cracked corn, and peanut hearts.

Cardinal birds are attracted to various flowers, but they especially like red and pink blooms. Some good plants to attract cardinals include:

When planting these or other flowers to attract cardinals, place them near your feeders or birdbath. Cardinals will come to visit often when you provide both food and water sources in your backyard.

How to Make Cardinal Birds Nectar?

If you want to attract cardinal birds to your yard, one way is to provide a feeder with a good supply of nectar. Nectar is easy and inexpensive to make at home using sugar and water.

Where to Place Cardinal Birds Feeder?

If you provide a feeder for cardinal birds, place it in an open area where the birds can easily see it.

The best spot is usually near some bushes or trees, so the cardinals have somewhere to hide if they need to.

Cardinal birds are territorial, so it is important to place their feeder in an area where they can see and defend their territory. A spot near a window or close to other bird feeders will work well.

Make sure the feeder is placed in an open area, as cardinals do not like to be hidden from view.

Also, be sure to keep the feeding area clean by removing old food and cleaning the feeder regularly; this will help keep the cardinal birds coming back for more.

Cardinal birds are attracted to bright colors, so try adding some red or orange accents near the feeder. you can also try sprinkling some black oil sunflower seeds around the feeder

Cardinal birds love to bathe in birdbaths. They will fly down and splash around in the water, then fly away to dry off. If you have a birdbath, put out some fresh water for the cardinal birds to use.

The bath should be shallow and have clean water in it at all times. Cardinals will use the bath for drinking, preening their feathers, and cooling off on hot days. Make sure the bath is close to your feeders so the birds can easily get to it.

The cardinal bird is a common sight in many backyards across the United States. They are fascinating creatures from a behavioral standpoint, as they are one of the few species that engage in males.

The cardinal bird is a symbol of guidance and hope. If you are lost or feeling down, finding a cardinal can help give you the strength to continue your journey.

We hope you take away some knowledge about these fascinating birds’ behavior. Have you ever seen or heard a cardinal in your backyard? What was your experience like?

Next time you see a cardinal, take a moment to appreciate their beauty and what they represent in life.