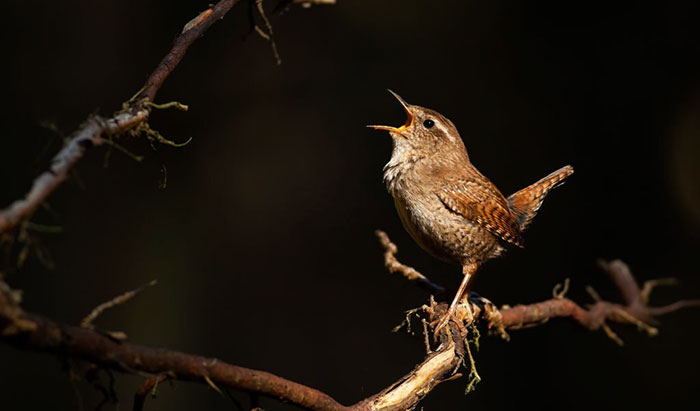 Among all five senses, sight is perhaps the most important for birds. It is what they use to stay away from predators, find a partner, fly safely, and hunt for food. Many often wonder as they are highly active during nighttime, do birds have night vision?

In a nutshell, birds can see at night, allowing them to fly and even hunt in the dark. It must be noted, however, that birds, like other animals such as cats, do not have perfect vision in total darkness.

To fully comprehend how can birds see in the dark, we need to understand the anatomy of the birds’ eyes.

Birds’ color perception is quite remarkable as they are tetrachromats, which means they can see in four colors. These are red, blue, green, and UV. In comparison, humans are trachoma, seeing only blue, green, and red. In addition, birds have a high sensitivity to UV-A.

The UV vision of birds enables them to easily spot berries, mammals, insects, and eggs all the way from the sky even if it’s dark. Birds can also see colors that are almost if not outright invisible to people.

Birds’ eyes are also capable of reflecting ultraviolet light onto their retina. This is all thanks to the pecten, a mechanism for reflecting and absorbing excess light that is reflected from the retina when the eye adapts to the dark.

Thus, the pecten allows ambient light to be adjusted so that the birds’ eyes can adjust to the darkness as well.

Birds also have this sensory perception called magnetoreception, allowing them to detect direction, location, and altitude. They use magnetoreception at night time to orient themselves when the lighting is dim.

The unit of frequency in which birds can see also moves faster. In comparison with humans, birds can see up to twice as much at 100 Hz as people can at 60Hz during continuous movements.

The Difference Between Nocturnal and Diurnal Birds in their Eyesight

Depending on the species, birds live nocturnally or diurnally. Nocturnal birds such as owls, night-herons, and nighthawk are active practically all night long. Diurnal birds, on the other hand, such as parrots, woodpeckers and hummingbirds are mostly active during the daytime.

Nocturnal birds have tubular eyes, containing lesser cones than the eyes of diurnal birds. Cones are cells that detect colors.

Likewise, nocturnal bird species also have eyes with rod cells that also perform well in dim lighting, which is why they are better at night vision.

There is a pathway in the eyes of nocturnal birds that connects rods to the same “dark” circuits as cones. This allows these birds to see edges, movement, and silhouettes in low light conditions.

All these enable nocturnal birds to forage, care for their young and hunt even in darkness.

In contrast, diurnal birds’ eyes have fewer rods but more cones. These birds are not entirely blind in dim light but their night vision is nowhere near that of nocturnal birds. However, diurnal birds can still see much clearer than other species in darkness.

Geese, for example, are diurnal birds and they can see 12 times better than people at night time.

What Activities Can Diurnal Birds Do at Night? 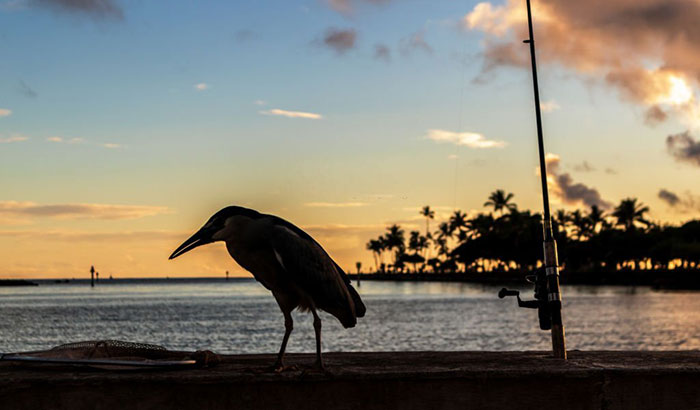 Diurnal birds may not have as solid vision as nocturnal birds at night but they can still engage in some activities at night time. These include the following:

Some diurnal birds choose to migrate at night time so they can avoid bigger birds and predators. Night migration enables smaller diurnal birds to steer clear of airborne predators.

These birds rely on stars for navigating the sky and fly on days when there is less air turbulence.

Birds sing at night for different reasons such as attracting mates or making territorial calls. Many species, however, typically sing at night as part of their nightly rituals either under the bright moon or with artificial lights.

Some male birds, especially Starlings, and American woodcocks perform elaborate sky dancing on spring evenings. They keep circling higher and higher in the air as part of their territorial display. After all, sky dancing is a lot like night singing for many birds.

These birds dance during the night before flying back to the ground.

Many people often ask do birds have night vision. The answer is yes as their eyes have mechanisms that allow them to adapt to the darkness quite well. Birds’ eyes are even better than many species. For example, when compared to humans’ eyesight, birds’ eyes allow them to see more colors and movements at a faster rate

However, nocturnal birds have better eyesight at night than diurnal ones. Both types of birds, however, can still engage in some forms of activities in the darkness like night migration, singing, and sky dancing.