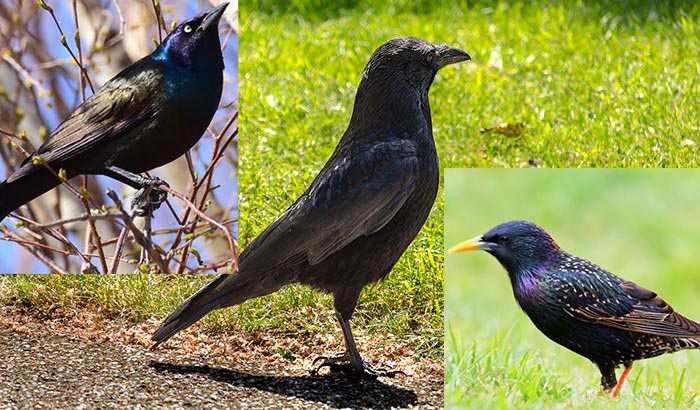 Of all the birds you want to visit in the backyard, the crow, grackle, and starling are probably not the bird species you want. These birds tend to dominate other small birds visiting your place and drive them away. Also, they travel together and look very similar to each other physically, making it hard to differentiate these three birds.

But in this article, we will try to differentiate grackle vs crow vs starling so that you will have an idea of when these birds visit your backyard. We will try to highlight the differences between each bird species to help you differentiate each of them easily.

From a distance, these three birds look similar in their blackish color. But if you try to observe them closer, you will be able to pinpoint the difference in their color pattern. As for crows, the color of their feathers are all black together with their legs and bill. When they molt, the old feathers can look brownish, while the new ones will look glossy.

On the other hand, when looking at starlings from afar, they look to have a black color all over their bodies. During summertime, their color is luminous purple-green with yellow beaks. During the winter, the plumage turns brown and is covered with white spots.

Meanwhile, when you compare grackle vs crow, they both appear black from a distance. But it’s only the crow which is pure black. The grackle appears different up close and personal. These birds actually have glossy purple heads and luminous bronzy bodies. Grackles also come with bright golden eyes.

If you try to analyze the table above, you can clearly see which is bigger of the three bird species. The biggest among the three birds is the crow, which has the heaviest weight, longest length, and the longest wingspan.

Using the table, comparing grackle vs starling in terms of their sizes will let you know that grackle have an edge in the weight, height, and wingspan category. However, the difference is not that big compared to the crow. So, grackle and starling do not differ much in terms of their overall size.

You can also identify the differences between the three birds using their overall shape. A crow is usually a long-legged, thick neck and has a heavy straight bill. What you will see in the crow when flying are broad and rounded wings and wingtip feathers. It also has a short tail with a rounded form at the end.

On the other hand, starlings are known to be bulky in shape but come with long slender beaks and short tails. When starlings are flying, their wings are very short and pointed, making them very small to see in the air.

When it comes to grackles, the most obvious shape is the long legs and tails. The head usually comes flat while the bill is longer compared to the others. During their flight, the wings will appear short compared to the tails.

You can also tell the difference between these three bird species by looking at the different foods they like to eat. As for crows, they love to eat pellet dog or cat food. They also like unsalted peanuts, seeds, vegetables, and fruits. They will also eat chicken and other meats if given a chance.

On the other hand, starlings are basically omnivores, meaning they like to eat seeds, grains, and even fruits. It is also normal for you to see starlings scavenging in garbage cans and trash to look for human waste food.

When it comes to the grackles, these birds love to forage on natural grounds. But their favorite food is insects found in the yards and fields, such as caterpillars, grasshoppers, beetles, and grubs which are all harmful to your crops and flowers.

You can also tell the difference between the three birds by the usual habitat they normally live in. As for the crow, they can be found in many places, but their usual preference is open areas. These places include agricultural fields, orchards, and savannahs. Crows also consider forests near streams and suburban areas as their habitat.

As far as starlings are concerned, they are usually found in lowlands and non-mountainous terrain. When the breeding season comes, you will see these birds in vegetation fields. But other times of the year will see these birds expanding their habitats, such as salt marshes and open moorlands.

When it comes to grackles, you will see these birds living in open and wet woodlands and marshes. It is likely that they will live in open areas such as suburbs, parks, and even agricultural fields.

Comparing grackle vs crow vs starling can be a challenge because all of them appear in dark colors from afar and usually come together. However, if you try to look at them closely, there are so many differences in terms of color pattern, size, shape, and other aspects. These bird species are completely different from each other, and you should know how to distinguish them when they come to your backyard.