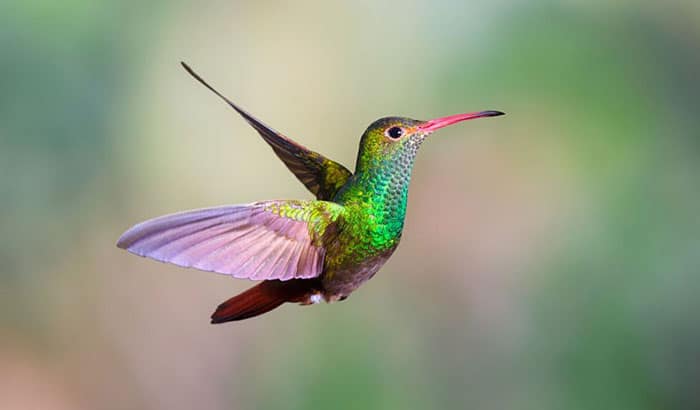 Do you know that hummingbirds can fly backward and upside down? They’re incredibly agile and can reach speeds of up to 60 miles per hour. Hummingbirds are also fascinating creatures, and in this post, we’ll take a look at some of the things that make them unique.

We’ll explore their diet, habitat, and behavior. Then we’ll also discuss some of the myths and misconceptions about these tiny birds. So if you’re curious about hummingbirds, stay tuned; we’ve got everything you need to know!

What Is a Hummingbird?

Hummingbirds are small birds, easily recognized with long thin bills and tiny feet. Unlike other birds, hummingbirds cannot walk or stand on two legs; instead, they spend most time hovering above the ground as butterflies do. That’s why people often encounter these species and get familiar with them.

The notable thing is there are not a few of these birds on the planet. In fact, the hummingbird is actually a large family bird with up to 360 discovered species.

How Did Hummingbirds Get Their Name?

Their name originates from the “humming sound” they create when flapping their wings at high speed. In truth, the hummingbird’s wings beat up to 80 times per second, making them extremely fast.

Its humming noise is only audible to humans when the bird is very close by.

How Long do Hummingbirds Live?

The hummingbird can live this long because hummingbirds can adapt to many different environments and changing conditions.

Types of Hummingbirds in the United States

There are over three hundred types of hummingbirds globally, but only twenty-five species can be found in North America. Here is a list of hummingbirds common to the United States: 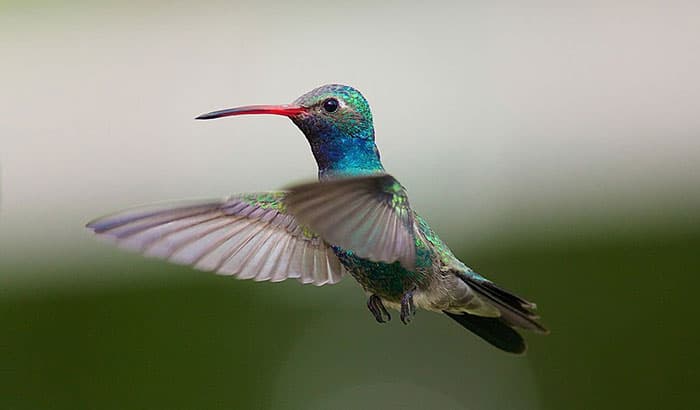 Hummingbirds have a variety of colors, shapes, and sizes. Since the family is large, it is understandable that such a variety exists. Still, many of them are alike in many features:

They are usually green or bronze in color. On some hummingbirds, you also find patches of orange, red, indigo, and blue.

In the United States, the hummingbird’s average size is around three inches long. Meanwhile, many other hummingbirds around the world can grow up to nine inches.

The hummingbird only weighs about 0.07 ounces, making them one of the smallest birds in the world.

In addition, hummingbirds have iridescent feathers due to the fact that they have about 100 feathers per square inch.

The hummingbird also has a unique tongue because it can be extended 7-10 centimeters beyond its bill, capable of licking nectar from flowers.

Hummingbirds are especially known because of their humming sound. The humming noise from hummingbirds is similar to the buzzing sound when you blow air through your lips.

This humming sound hummingbirds is mainly produced by their wings beating against the air, making it a tad difficult for humans to hear clearly.

How Are Hummingbirds Different From Other Birds?

Compared with other birds, hummingbirds have several unique and distinguishing characteristics.

Why Are Hummingbirds So Special?

It allows Hummingbirds to fly Forward, Backward, or even Hover Mid-Air.

A hummingbird is known for its unique ability to fly in all directions, including up, down, forward, and backward. They can go from a completely still position in the air into a dead drop straight towards the ground quickly without much warning, making them excellent aerialists.

The unique wings are highly modified, beating up to 80 beats per second, so they do not have to gain much momentum before moving quickly in another direction.

Where do Hummingbirds Live?

Hummingbirds live mostly in climates near or within tropical areas, including:

There is a hummingbird species that lives year-round in the United States. However, some hummingbirds migrate during different seasons due to food or weather.

Where do Hummingbirds Nest?

Where do Hummingbirds Sleep?

Hummingbirds will find a branch close by to where hummingbirds build their nests and sleep there.

The hummingbird’s feathers are very soft so they can rest comfortably while hanging upside down.

Where do Hummingbirds go at Night?

A hummingbird’s sleeping habits are very different from many other birds.

For example, hummingbirds don’t use their nests to protect themselves from predators during the night because hummingbirds sleep in trees or shrubs when they sleep at night.

About twenty-five different known hummingbird species engage in migration due to food sources or weather changes. Those reasons are why hummingbirds move from place to place more frequently.

Where do Hummingbirds go in the Winter?

During the winter, hummingbirds migrate south to warmer climates. The hummingbird’s winter migration does not take as long as they migrate north. Hummingbirds can fly faster and don’t have to travel as far since there are other nesting areas during the winter months.

Plus, hummingbirds do not have to stop for food or often rest while flying south to their winter home.

How far do Hummingbirds Migrate?

How long does it take Hummingbirds to Migrate?

It takes hummingbirds anywhere from two to four days to complete a one-way migration trip.

They stop every few hours at different locations along the way to eat and rest before continuing on their journey.

When do Hummingbirds Lay Eggs?

How to Attract Hummingbirds?

You can create an environment in your backyard with:

You can plant flowers that hummingbirds are attracted to, including honeysuckle, bee balm, red salvia, trumpet vine, and petunias.

Hummingbirds are attracted to flowers that have bright colors, often from red to orange or light pink. You can also decorate your flower bed with small rocks and gravels, creating an attractive ground environment for hummingbirds if you place this near its hummingbird feeder.

Is it Dangerous To Touch A Hummingbird?

No matter how friendly and harmless the hummingbird looks, do not touch them.

Even though hummingbirds are tiny, they have very sharp beaks, which can hurt you badly if you get caught by surprise. So a little distance and respect should be good when watching a hummingbird.

Plus, hummingbird disease can spread quickly throughout hummingbirds’ entire population, so you need to handle hummingbirds with care.

What do Hummingbirds Eat?

Hummingbirds have an extremely high metabolism rate and need to eat approximately every 10 to 15 minutes.

While hummingbirds are migrating south, they eat:

When the fruit isn’t as easily accessible during the winter months, hummingbirds migrate to Mexico, where they live off of flower nectar until the birds return north again during the summertime.

Once hummingbirds return north, hummingbirds gorge themselves on insects and hummingbird food to store up fat reserves for the next migration.

What to Put in a Hummingbird Feeder?

Hummingbirds will be attracted to hummingbird feeders with brightly colored red flowers or other colors on them. They have sharp color vision and are very attracted to bright colors.

You can make hummingbird nectar in the following steps:

Where to Place a Hummingbird Feeder?

Don’t worry if you don’t have a garden of your own, just hanging a hummingbird feeder in your backyard is enough to attract hummingbirds from blocks away.

In addition, hummingbirds aren’t picky about their food or where they eat it as long as there isn’t any danger near the source of food.

Hummingbirds also need water to drink. While hummingbirds get moisture from flower nectar, hummingbirds will also get water from larger bodies of water during the summer months when flowers aren’t as common.

Such a plcement gives hummingbirds easier access to both the hummingbird feeder and drinking source at once.

Placing rocks around hummingbird feeders will also help hummingbirds navigate to their food source since hummingbirds are very attracted to bright colors.

Hummingbirds are fascinating creatures, and it’s no wonder that they have long been a source of fascination for people all over the world.

As we learn more about these fantastic birds, we come to appreciate their remarkable abilities and the vital role they play in our ecosystems.

We hope you’ve enjoyed learning about hummingbirds as much as we have.