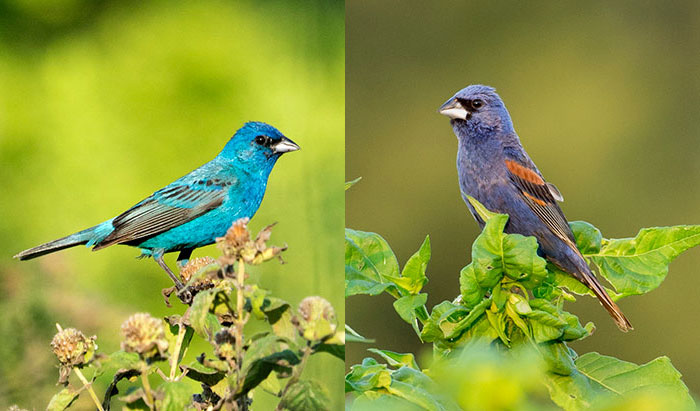 It can be confusing to identify indigo buntings and blue grosbeak. Both birds look very similar in their overall appearance, especially the blue bodies, dark wings, and tails. But actually, you can still identify the difference between the two when you look beyond the similar physical features mentioned.

So, what is the difference between indigo bunting vs blue grosbeak? The blue grosbeak is larger in size and comes with rusty wing bars and a heavier beak. Other notable differences will be listed in this article.

Apart from the height, the wingspan measure of both these birds will also tell the difference in size between the two birds. On average, the wingspan of an indigo bunting is only 8 inches, which is 3 inches shorter than the 11 inches average length of the wingspan of the blue grosbeak.

From afar, the bluish appearance between these two birds makes them really similar to each other. But, if you try to look at them closely, you will see the difference in the physical features of the two birds.
First, the indigo bunting has a natural bluish body that comes with blackish wings and a tail. On the other hand, the shade of blue in the body of the blue grosbeak is darker compared to the indigo bunting. The dark blue color reaches the head, while the wings and tail are also black in color.

The color of the wings will also give you the difference between the two birds. The indigo buntings come with a bluish wing with coverts but no wing bars. This feature is so different from the blue grosbeak as the color of its wings is black while having rusty wing bars.

You can also tell the difference between the two birds with the size of their bill. The indigo bunting comes with a smaller cone-shaped bill, while the blue grosbeak comes with a larger bill. The color of their bills is also different from the indigo bunting’s bill is colored gray or silver. The blue grosbeak’s bill is dark gray on the upper part and light gray on the lower part.

The difference between these two similar birds can also be identified by the place they usually live. As far as indigo buntings are concerned, they usually lived in open deciduous forests and woods, brushy forest edges, farmland, and even second-growth woodland.

On the other hand, blue grosbeaks typically live in open areas, along with brushes and trees. You will also find these birds near water, in the streamside thickets and mesquite groves. After the breeding season, you will likely see these birds in open weedy fields.

The food they eat can also make a difference between the two birds. In the wild, blue grosbeak likes to eat live food which is rich in protein. These foods include insects such as spiders, grasshoppers, snails, cicadas, and beetles. During the breeding season, it is expected that this bird will eat primarily insects.

If you want to attract blue grosbeak into your backyard, you can fill the bird feeder with seeds such as sunflower seeds. You can also give other foods such as rice, corn, and wheat for the birds to come to your backyard.

On the other hand, indigo buntings like to devour berries such as elderberries, strawberries, serviceberries, blackberries, and blueberries. The birds will also feast on insects that generally are attracted to these plants, such as beetles and grasshoppers.

You can attract indigo buntings in your backyard by putting small seeds such as nyjer or thistle in the bird feeders. They will also be attracted and eat live worms and insects if you provide them in the bird feeder.

The range of these two bird species differs slightly, with much of it overlapping. For the blue grosbeak, the general range can reach as far as south to central America during the winter season and as far as North Dakota in the north during the summer. The range spans from the east to the west coast and can be found rapidly in the southern United States.

When comparing indigo bunting vs blue grosbeak, you need to look at them carefully to differentiate the two birds. They are both colored blue but taking a close look at these birds closely will make you realize the difference between the two. These two birds also differ in food preference, habitat, and range.