Sleep is essential for birds. It helps them conserve energy and helps them recover from illnesses and injuries. Moreover, it also contributes to the birds’ growth. Sleep serves the same purpose to the birds as it does to humans. This article will go over when the birds sleep, where they sleep, and how they sleep.

What is the Sleeping Time for Birds?

Diurnal birds have finely tuned body clocks. They sleep from sundown and wake up at first light. Birds roost as soon as the world begins to get dark. As soon as their eyes sense the first light, they awaken and start to venture for food.

Diurnal birds use their sense of sight to hunt for food. Thus, they need maximum lighting to see their food. They sleep during night hours since their eyes do not function impeccably in the dark.

Nocturnes sleep during the day. Birds like the owls spend their nights searching for food. Furthermore, when night fowls are not scouting for food, they spend the night caring for and preening their babies. As soon as the sun rises, they go to sleep to regain their strength.

Hours During the Day

Some birds sleep when they have nothing else to do. Some fowls sleep in the middle of the day after they finish foraging. There are times that they sleep to regain their energy after hunting. Naps are short sleeping periods of l=birds during the day.

Furthermore, the species of birds residing in the Arctic Circle do not experience nighttime in the summertime. Arctic birds either sleep at a specific time within the 24-hour time frame or sleep in short periods throughout the day.

It may sound uncanny, but it is true. Instead of sleeping during the day or during the night, certain species such as shorebirds sleep during high tide and scout for food during low tide. Low tide is hunting time because this is the time that their food becomes available. Fowls with these characteristics are called Waders.

Waders exhibit a distinct activity pattern by foraging along coasts. They also hunt small animals in the mud and shallow waters of estuaries. They have better low-light vision than our daytime birds, allowing them to scavenge either during the day or night. Moreover, they don’t need light since they hunt using their sense of touch, not their sense of sight.

An Entire Day or Two

Again, the thought of birds sleeping for an entire day or more is out of the ordinary. Allegedly, birds sleep for the said length of time after migration.

What Causes Birds to Sleep 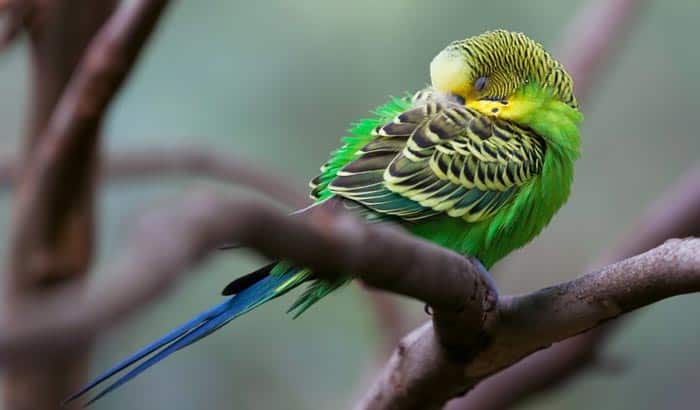 Birds sleep due to two main reasons. First, birds sleep due to extreme fatigue. After a long day of flying and hunting, birds tend to doze off to regain their energy. Second, birds sleep because they have nothing else to do. The majority of birds need their sense of sight to move around. When their eyes are no longer able to function in the light setting, they sleep.

There may be nights that you will hear more than just the hooting of owls. These are songbirds chirping or singing. This type of behavior is due to foreign objects or changes in their environment. For instance, birds can’t sleep when there are light beams and noise that disturb them. Disturbances may come from vehicles and parties or concerts near their sleeping spots.

Birds may get disturbed during their sleep. Birds usually position themselves in places that are most susceptible to vibrations. The said vibrations are caused by approaching predators. Upon feeling the unnecessary vibrations, birds wake up and attempt to evade the perceived danger.

Contrary to popular belief, birds do not sleep in their nests. Birds sleep in spaces that they deem safe from predators. Thus, they choose locations such as cavities, niches, canopies, snags, and dense thickets to roost in during the night. The selected sleeping spots also serve as their refuge during the winters.

Waders such as herons and flamingos sleep standing in water or on an island. Geese, ducks, and other waterfowl, on the other hand, float on the water while sleeping. Meanwhile, small birds sleep up high in the trees to keep them hidden from predators both in the ground and in the air.

How do Birds Sleep?

Studies reveal that birds can sleep with a part of their brain awake and alert to perceive imminent danger. Such ability is called unihemispheric slow-wave sleep (USWS). Accordingly, fowls can control how many percent of their brain sleeps and how much stays active.

Birds have different sleeping positions. You may have noticed that some birds sleep standing on one foot. To conserve body heat, birds fluff up their feathers, tuck their heads into their back feathers before pulling up one of their feet.

Some birds perch up in tree branches. You may wonder how they don’t fall from their sleeping spots. It turns out that there are tendons in the feet of the fowls that allow their feet to wrap around branches automatically. When the birds wake up, their feet loosen around the tree limbs on reflex.

Some birds sleep in flocks due to the idea that there is safety in numbers. When birds can’t find cavities and other safe spots to sleep in, they end up sleeping in groups in unsafe spaces.

Knowing and understanding the sleeping behaviors and patterns of birds teaches us how unique birds can be. Furthermore, we now know how to make the birds in our immediate vicinity feel safe and secure while sleeping.