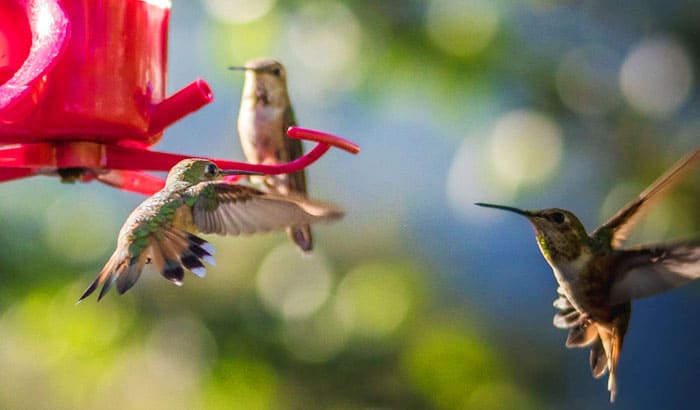 Hummingbirds are extremely cute, aren’t they? They are tiny. They have such long beaks and speedy wings. But surprisingly, they are very aggressive, especially towards each other. I’ve noticed this since I started putting our hummingbird feeders. These birds fight for food. But why? Why do hummingbirds fight over the feeder? And is there a way to stop them from killing each other?

Why Hummingbirds Fight Each Other

Hummingbirds are very territorial creatures. This is doubly true during the mating season (around December). In the wild, it is understandable why these birds have to be territorial. They are very small. They can be vulnerable to danger. This is why when they find a place suitable for their survival, they will fight other hummers who want to claim the territory.

Once these birds find a place where they are safe from predators and have a good food source, they are not inclined to share. If they don’t get the nutrition that they need, they will lack the energy to make their quick movements. They will not be able to evade predators. Their aggressiveness is entirely for their survival. And here I thought that they’re cute creatures who are all sweet and giving.

Hummingbirds understand that a food source will run out of food. That’s the way it is with flowers. That is why they protect a feeder. They want to make full use of its nutrition.

Their being territorial is the only reason why hummingbirds fight each other over feeders. It is distressing to see these tiny creatures try to rip each other’s heads off. So I did some studying trying to find ways to prevent them from fighting. I’ve learned of one that is highly effective.

How to Prevent Hummingbirds from Fighting Each Other Over Feeders 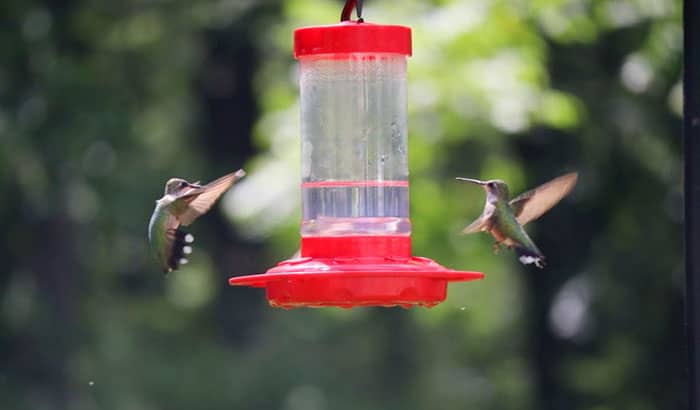 In the story I shared, I used a feeder with multiple ports. That was a mistake. I should only get a feeder that allows only one hummingbird to feed on it. But how do I get to see more hummingbirds?

I learned that hanging multiple hummingbirds over a wide area works. This will give several hummingbirds the chance to get their load of nutrition without disturbing fellow hummers.

I make sure to hang the feeders out of sight from each other. This way, each hummer that finds a feeder can claim it as his territory. If he sees another feeder, he will claim both as his. I don’t want that to happen.

If I still see some fighting, I move the feeders farther apart.

Provide as Much Food Sources as Possible

Feeders are not the only food sources I can provide. I can also provide flowers. Having tons of nectar-rich flowers lets the hummingbirds know that there’s plenty of food available. It somewhat limits the fighting.

There are only so many food sources that a hummingbird can claim and protect. If one is busily protecting a feeder, he may not bother protecting flowers. Hummingbirds are especially attracted to red and/or bell-shaped flowers. These include bee balm, beardtongue, azalea, cardinal flower, honeysuckle, foxglove, pride of Madeira, trumpet flower, petunias, bleeding heart, butterfly bush, and more.

Also, by having lots of flowering plants around, I’m improving the ecosystem of my garden. It allows more insects to live in it. Hummingbirds also eat insects. Insects are another food source the hummingbirds can be forced to share.

In the story I shared, the original hummingbird is a bully, a territorial overlord. While it is understandable why the bird is doing what it is doing, he didn’t need to do it. There’s plenty of food for other hummingbirds. That is why I removed it from its position of power. Here’s how I did that.

I kept track of that particular hummingbird. Hummingbirds can spend hours sitting on their favorite perches. If they have a territory to protect, they will choose a high perch from which they can have a complete view of their territory. I made sure that I found the correct perch from which the little rascal overlooks his territory. Then I removed that perch.

This forced the bully hummingbird to find a different position that may be less dominant.

How can I prevent them from fighting over feeders? Hang many feeders and provide as many food sources as possible. Removing perches that allows birds to oversee a wide territory also helps.

Though hummingbirds are extremely territorial and fight for food sources, they can be made to live in peace with other hummingbirds.

1 thought on “Why Do Hummingbirds Fight Over the Feeder & How to Stop It?”