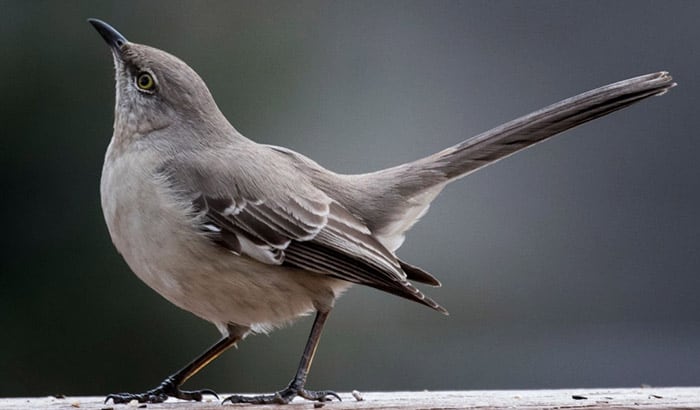 Mockingbirds are common birds living throughout North American regions. These birds are known for singing throughout the day, mostly to claim their territories or attract mates. But mockingbirds singing during spring and summer nights is also common.

It’s a mystery to many why mockingbirds sing at night. Some say it is to attract mates and ward off predators. Meanwhile, others claim that mockingbirds are just territorial and like to make their presence known in the dark.

There are several theories behind this phenomenon, and we will explore them in this blog post!

Reasons Why Mockingbirds Sing at night

Mockingbirds living in the eastern half of North America often sing at night. The mockingbird’s nocturnal song is a series of high-pitched whistles and trills that can be heard more than a mile away.

Protect Themselves from Predators

Research has shown that mockingbirds sing at night to keep themselves safe from nocturnal predators such as owls and opossums. In addition, mockingbirds are territorial and like to make their presence known in the dark.

Defend or Claim Territories without Getting Hurt

A study published in Animal Behavior found that when a bird sings during daylight hours, other birds will often respond by challenging them to territorial disputes. This results in less success for the daytime singer than an individual who performs at night.

Researchers believe that this strategy evolved as a way for mockingbirds to gain access to prime real estate spots with fewer challenges from competitors. Instead of engaging in physical fights that might cost them their health and life, male mockingbirds choose to show their strength with aggressive voices.

Attracts Mates for the Breeding Season

You can sometimes hear mockingbirds singing at night, often very loudly and incessantly. This is especially common in the springtime when the birds are breeding.

Mockingbirds also sing at night to attract mates; young males become increasingly desperate if they haven’t found a mate during the breeding season. Such a situation leads to an increase in singing, often extending throughout day and night.

Communicate and Flaunt their Beautiful Voices

Mockingbirds also have an incredibly complex song pattern with different variations based on how close or far away from another mockingbird might be. This requires more concentration than if they were making noise in broad daylight.

So while you may not hear as much bird chatter during the daytime hours, the nighttime offers some special moments where nature’s beauty shines through even brighter.

Although mockingbirds are common birds, there is still much to be learned about their behavior.

How do you stop a Mockingbird from Singing at Night?

Some mockingbirds will stop singing at night if you cover their cage with a blanket, but others may still sing under cover of darkness.

If covering the mockingbird’s cage doesn’t work, try releasing it; maybe the bird needs to attract a mate. When the bird no longer sings, go outside, capture it, and bring it back inside your home.

If mockingbirds often sit on the tree beside your houses, singing and disturbing your sleep, try using bird netting. You can purchase those nets in gardening stores and cover your tree brands.

The mystery of the mockingbird’s nocturnal serenade has been solved; mockingbirds are one of the few birds that sing at night. When we think of the night, we often imagine the darkness and a lack of light.

However, many birds use this time to sing their songs for searching mates, communicating, or fending their homes. If you hear mockingbirds singing near your house, you should not be too alarmed or puzzled by such natural behaviors.